a few words of a kind…

Archive for the tag “mummers”

here’s Paddy Pharaic Mhichil Shannon remembering Christmas time long ago in Doolin, County Clare. This is an extract from ‘The Way We Were’ chapter of Doolin: people, place & culture

The longest memories I have are of Christmas. We’d be getting ready for Christmas for weeks. There used to be great excitement. The house would be cleaned from top to bottom and decorated with holly and ivy. Thee used to be big markets in Ennistymon and my mother would go there with other women from the village. That would be their biggest shopping day of the year. We’d be down at the bridge, waitin’ for them to come home and wonderin’ what they’d bring us back. If we got jam and baker’s bread we’d be over the moon. We never got toys or do-das, but all the same we had plenty to play with. I remember gettin’ a small piece of currant cake from my mother one Christmas Eve and goin’ down to the street so the other children would see it, I was that proud of it. Even though money was scarce, Christmas was much nicer then, a lot of the old customs are gone and forgotten now.

Except for the gentry, Christmas was the only time in the year that people here got a letter or a card. A lot of money came from America and other places then. Sometimes parcels arrived too, mostly with clothes. On Christmas Eve, before we had the tea, my father would gather us in the kitchen to light the Christmas candle. It was the youngest of the family that always lit it and I remember my father holdin’ my hand to do it. He used to say a prayer in Irish, to welcome Mary and Joseph to the house if they happened to be passin’. From that candle, other ones were lit and put in the windows. Every family did the same, and it was beautiful to look across the countryside and see all the little lights in the cottages. I remember walkin’ to Mass on Christmas morning with my mother and father when I was very young. It was pitch dark and there was a candle lighting in the window of every cottage. All the people goin’ to Mass were talkin’ Irish and givin’ blessings to each other. I’ll never forget that.

It would still be dark on St. Stephen’s morn when you’d hear horns blowin’, callin’ the Wren Boys. If you looked out the window, you’d see all the candles bein’ lit in the cottages all around. The Wren Boys used gather below at the bridge in Fisherstreet, they might be thirty or forty people in the batch, between dancers and players and an amadán (male fool/clown) and an oinseach (female fool). They’d be dressed up with coats turned inside out and crossed with ribbons of green and gold. Stepheneen Hardy was their leader when I was young and he rode a black ass.

The Wren Boys would travel the country that day and come back here at night. We’d hear the noise of them comin’ and everyone would go down to the bridge to meet them. Stepheneen would lead them through Fisherstreet and stop below outside O’Connor’s pub. That was their last stop. There used to be great excitement and of course ’twould go on for hours, music, set dancin’ and a bit of singin’.

What money the Wren Boys collected was always put towards a Swarie. In this village, I remember great Swaries down at Anthony Moloney’s house near the bridge. Dancin’ an’ singin’ went on all night, they were great times, so they were. And what ever drink and cake and the likes was left over was the makin’ of another great night. Them nights were called Scrap Parties and were often even better than the Swarie. ’Tis a pity all that died out.

Read a book by Eddie Stack this Christmas… 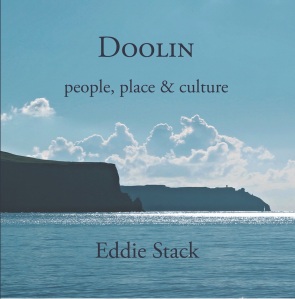 On St. Stephen’s Day, December 26th, groups of musicians and dancers would get together in Clare, dress in disguise and set off around the countryside. Known as wrenboys or mummers, they called to houses, played music and danced sets, sang and recited. Then they collected money and invited donors to a mummers dance or swaree, which would be held locally a few nights later. A troop of wren boys was called ‘a batch’ and they gave a great boost to the Christmas.

Paddy Pharaic Shannon of Doolin, County Clare recalls the wrenboys of the 1930’s:

T’would still be dark on St. Stephen’s morn when you’d hear the horns blowin’ callin’ the wrenboys. If you looked out the window, you’d see all the candles bein’ lit in the cottages all around. The wrenboys used gather below at the bridge in Fisherstreet, they might be thirty or forty people in it between dancers and players and an amadan and an oinseach. They’d be dressed up with coats turned inside out and ribbons of green and gold. Stepheneen Hardy was their leader when I was young and he rode a black ass.

The wrenboys would travel the country that day and come back here at night. We’d hear the noise of them comin’ and everyone would go down to the bridge to meet them. Stepheneen would lead them through Fisherstreet and stop below outside Connor’s pub. That was their last stop. There used be great excitement and of course t’would go on for hours, music, set dancin’ and a bit of singin’. And then a few nights later there would be a big swaree beyond in Anton Moloney’s place.” 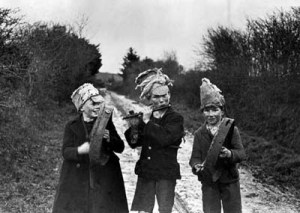 Swarees were held in houses that had a big kitchen with plenty of room for dancing. They were the most clandestine of country dances and had a wild edge or energy — Christmas spirit gone native. The ring of the word swaree conjures up mayem, even though it’s a corruption of the genial French word soiree. There was loads of drink at swarees and they lasted from dusk to dawn and longer. Nothing sent parish priests around the bend more than a confessional whisper that a swaree had taken place in the fold. It was like an ambush of the faithful by Beelzebub.

A notorious swaree took place in Coor, near Miltown-Malbay, County Clare in the 1950’s. Held in the house of a ‘strong’ farmer on the 28th of December, the place was mobbed and makeshift bars were set up in the cowshed to cater for the attendees. Musicians came from as far as Doolin and dancers from Inagh were there out of a face. Late at night there were emergency dashes to Miltown, Lahinch and even Ennistymon for barrels of porter and bottles of whiskey.
The following night there was a scrap party from the leftovers— a ‘low key’ event for the musicians and high dancers. This was also a mighty night and went on very late. And just when it was winding down, musicians arrived from a swaree in Cree with crates of beer.
Like the miracle of the loaves and fishes, the drink seemed the replicate itself or something, and there was enough booty for a third night’s lashing. Word traveled fast and far and the second Scrap Party was a whale of a session. The Kilfenora crowd arrived, long coats and hair oil, machine guns in fiddle cases, they could have been from Chicago. Their music was turbo charged: their players took no prisioners and their dancers could batter heel or sole.
People said that the music from the swaree and the scrap parties hung over the countryside for weeks, like some sort of a fog. There wasn’t a minute of the day when they weren’t hearing jigs and reels and the clattering of steps on a flag floor.

A priest raided a swaree in the parish of Liscannor, County Clare. The ‘night’ was held in John Killoughrey’s house on New Year’s Eve. The place was packed and there was two barrels of porter and assorted bottles of poitin and whiskey in the parlor. On the kitchen table, Pakie Russell, concertina; Gussie Russell, flute; John Killoughery, fife; Paddy Killoughry, fiddle. The place was hopping when the priest arrived. He told John that the devil was in the house. John said,
‘Well isn’t it great work Father but I can’t see him.’

The priest supposedly tried to turn John into a pillar of salt or something, but the mumbo jumbo didn’t work.
‘And then he came at me with the umbrella,’ said John, ‘and wasn’t the dog under the table and didn’t he go for him. Well he got the fright of his life. He thought the dog was the devil! He ran out of the place roarin’ prayers.’

I took part in one of the last wrenboy expeditions who went collecting for a swaree in North Clare. We were a strange crew— a matchmaker, a carpenter, a boatman, a farmer, three students and four women mad for dancing. We weren’t the best mummers in Clare but we had rhythm and style. It was a rainy day and our progress was slow, delayed by hospitality and hot whiskeys. Our route took us through Corofin and there we tarried in Bofey Quinns, when we met a group of kindred wrenboys from Ruan. We played tunes and drank porter and lost track of our mission but had a mighty session. By the time we got back to Ennistymon that night, we were footless. Our money box was empty — only a few copper coins and a miraculous medal from Lourdes. There would be no swaree, a tradition was breaking.

The swarees died out in Clare in the 1980’s but the wrenboy tradition continues. So let it rip on day, Banner boys and girls, though my heart is in San Francisco, my spirit is with ye. Beir búa.